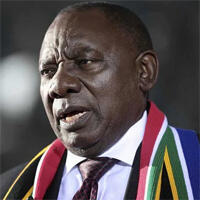 On 9 May 1994, the late struggle stalwart Albertina Sisulu rose from her seat in the first democratic sitting of Parliament to nominate former statesman Nelson Mandela as President in what has since become a historic visual in the minds of most South Africans.

That was 25 years ago. On Tuesday, ANC’s incoming Chief Whip Pemmy Majodina rose to nominate Cyril Ramaphosa for the position of President.

Addressing the house as a President-elect, he said the basis of his government and that of the incoming Cabinet will be that of collaboration, finding consensus and bringing about change.

He said despite coming from different political parties, all MPs have a common mandate to build a nation founded on the principles of social justice, solidarity and equality.

“All of us must see ourselves as holding the hopes and aspirations of our people…” he said.

“As for me, I commit myself to work day and night, to work very hard for the interests of our people,” he said.

The President-elect said this after Chief Justice Mogoeng Mogoeng confirmed his election unopposed.

“The nomination is in order and in terms of item five … of the Constitution, I declare Matamela Cyril Ramaphosa duly elected the President of the Republic of South Africa.

“I cease this opportunity to congratulate you on Mr President on your election…,” the Chief Justice said.

The President’s election came shortly after former National Council of Provinces Chairperson Thandi Modise was elected as the Speaker of the National Assembly after a vote.

The Chief Justice declared Modise as a Speaker after she received 250 votes against the DA’s Thembekile Richard Majola, who received 83 votes. Some 17 ballots were spoilt.

Lechesa Tsenoli, MP, who was a Deputy Speaker in the 5th Parliament, retained his position after he was nominated unopposed.

Shortly after the President’s election, opposition leaders took turns to congratulate the President, the Speaker and the Deputy Speaker.

“Lastly I would like to say, Mr President, that may this be a season of greater collaboration,” he said, adding that while they may have stood on opposite ends in the chamber, they are both patriots and dedicated to serving the interests of the people of South Africa.