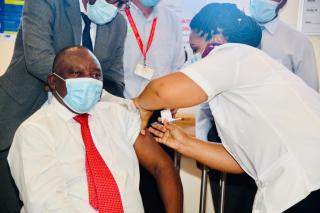 President Cyril Ramaphosa and Health Minister Zweli Mkhize were among the first to receive the Johnson&Johnson vaccine.

Phase 1 of the vaccine rollout took place today at Khayelitsha District Hospital in the Western Cape.

Healthcare workers at the hospital were the first to receive the first shots of the vaccine along with the President and Health Minister.

“To demonstrate our confidence in this vaccine and help allay any fears that people may have, the Minister of Health and I will join the first health care workers to receive the vaccine in Khayelitsha.

“We have called on leaders in various sectors and parts of the country to lead by example and get inoculated publicly. We will therefore witness some Premiers, MECs and leaders from civil society, religious formations and traditional leadership being vaccinated in all provinces. ” said the President.

The first 80 000 doses of the Johnson&Johnson vaccine will be used in phase 1 of the rollout plan instead of the AstraZeneca vaccine.

This comes after government discovered the AstraZeneca vaccine is only 22% effective against the 501Y.V2 Covid-19 variant found in South Africa.

"The recent announcement around the limited efficacy of the AstraZeneca vaccine, which we had already procured, was certainly disappointing, however we were determined not to be derailed from our commitment to rollout vaccines in February." said Minister Mkhize.

The Johnson&Johnson vaccine is a step up from this, as it has an efficacy rate of 57% against the variant.

The vaccine will be rolled out through a programme called Sisonke.

Although the Johnson&Johnson vaccine has been approved, it has not been licensed.

Professor Linda-Gail Bekker, Deputy Director of the Desmond Tutu HIV Foundation, said the Sisonke programme will require healthcare workers to give their consent before being vaccinated.

“We have a safe and effective vaccine that is not licensed. We’re going to introduce it through this other mechanism called the Sisonke program while we wait for licensure to arrive, ” said Bekker.

“Before healthcare workers can receive the jab they will need to register and a text message will be sent to them, asking if they would like to go with Sisonke and if they say yes, they will go through a simple electronic consent process. If they agree to this, a vaccination voucher will be issued. They have to take this voucher to the vaccination site, ”she said.

Healthcare workers who volunteer for Sisonke will have to get their blood tested to see the antibody response to the vaccine three months and six months after being vaccinated.

“We are doing what we are going to do in the mass deployment. We want to monitor hospitalization to make sure the vaccine is having the kind of impact on the population that we would accept." said Bekker.