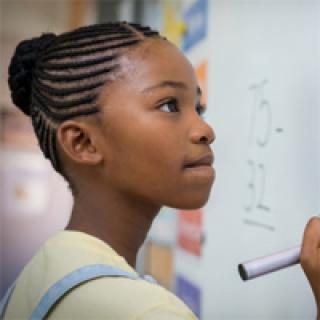 President Cyril Ramaphosa says all languages in South Africa must be treated equally.

“Every single language spoken in this country has equal value and equal worth,” President Ramaphosa said on Tuesday.

Speaking at the National Heritage Day celebration in Upington in the Northern Cape, the President said government is doing everything within its means to promote and preserve all languages, especially the languages of the people of the Northern Cape that are dying out such as N|uu, Nama, !Xun and Khwe.

“We are working to restore the collective pride of our people,” President Ramaphosa said.

President Ramaphosa commended the efforts of the Northern Cape provincial government, which is sending five students to receive training as Nama educators at the University of Namibia.

“Around the country there are efforts underway to promote indigenous languages and multilingualism through the Commission for the Promotion and Protection of the Rights of Cultural, Religious and Linguistic Communities and the Pan South African Language Board.

“We are working with our institutions of higher learning to develop lexicography and terminology development units, and offer bursary schemes to students wanting to major in African languages. We are actively working to make sure African languages are offered in all of our schools,” the President said.

Government has over the last few years reduced the number of public schools that do not teach African languages from 2 500 schools to just over 460.

“Our Parliament has also been asked to elevate Sign Language to the status of an official language,” the President said.

The United Nations has declared 2019 the Year of Indigenous Languages. This year, Heritage Month is focused on elevating all languages and to see to it that they are more widely spoken and read.

Heritage Day on 24 September recognises and celebrates the cultural wealth of all South Africans. South Africans celebrate the day by remembering the heritage of the many cultures that make up the population of South Africa.

The theme for this year’s Heritage Month 2019 is: ‘25 Years of Democracy: Celebrating South Africa’s literary classics in the year of indigenous languages’.

Since 2014, government has collaborated closely with institutions of higher learning in working towards the further development and preservation of African languages.

On Tuesday, the local communities of Upington and the surrounding areas came in their numbers to celebrate Heritage Day.

Local resident Bathabile Maake told SAnews that Heritage Day is an opportunity for the younger generation to learn about their traditions and cultures.

Didi Didile from Kimberly said she is happy that N|uu, Nama, !Xun and Khwe are being recognised.

“We need to know all these languages spoken in our province so we can communicate in them,” Didile said.

Construction on the library, which cost R37.4 million, started last year and it was completed this year in May.

The library is situated in the Upington CBD, corner Brug and Carlton Street, close to all the other necessary services.

Doreen Saaiman, a grade 12 learner, said the library will encourage the local youth to read and grow academically.

“Most young people get discouraged to continue with their studies because of lack of books or places to study. The library will encourage them to study,” Saaiman said.

“Young people are determined to study. They need libraries to study and do their homework,” Stuurman said.