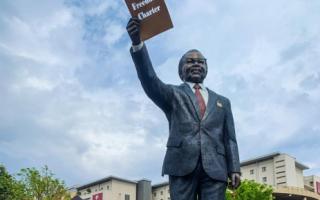 The nine-metre tall bronze statue, which is situated outside the airport, comes exactly 103 years after the birth of the globally respected leader

“Like the statue of President Mandela at the Union Buildings in Tshwane, I have no doubt that this one too will become a tourist attraction and that it will become an essential stop for visitors to the OR Tambo Cultural Precinct, which is doing so much to preserve the legacy of this great man,” said the President.

The statue is meant to pay tribute to the man who worked tirelessly to forge international support for the anti-apartheid struggle.

“It is, therefore, most fitting that this statue has been erected here at this airport that bears his name, and that is a gateway to the continent and to the world.

“As they take their first steps on South African soil, visitors to our country will see this magnificent bronze gleaming in the sunlight.

This statue is a colossus, as was the man it commemorates,” said the President.

Following the big reveal, the President went on to announce the R950 million Radisson Hotel & Convention Centre, which will give South Africa’s tourism economy a significant boost.

The hotel is scheduled to open to the public on the 2nd of November 2020 and will introduce the Radisson Hotel Group’s fourth brand in South Africa - The Upscale Radisson - as one of the key projects and catalysts towards the realisation of the City of Ekurhuleni’s 30-year Aerotropolis Masterplan.

This plan is expected to transform the city into a global logistics hub with OR Tambo International as the foundation.

Once opened, the Radisson Hotel is expected to create 565 full-time jobs.