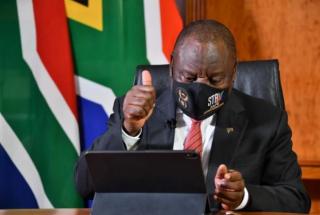 Now that the country has moved to lockdown level 2, President Cyril Ramaphosa has cautioned against people letting their guard down by not observing COVID-19 health and safety protocols, despite many restrictions being lifted.

“With this comes increased risk of transmission. We now need to manage this risk and ensure the gains we have made thus far in containing the pandemic’s spread, are not reversed.

The greatest threat to the health of the nation right now is complacency,” said the President in his weekly newsletter on Monday.

During his address to the nation on Saturday, Ramaphosa announced Cabinet’s decision to move the entire country to alert level 2 at midnight on Monday, 17 August.

“It may be that we are now permitted to meet friends and family, to visit entertainment venues, to travel for leisure and to consume alcohol in restaurants, bars and taverns.

But as the old adage goes, just because you can, doesn’t mean you should,” said the President in the newsletter.

The President continued by saying that some Covid-19 patients are Asymptomatic and do not display any symptoms of the virus meaning they may not even know they are infected.

“This is a sobering reality because it means that any of us could be infected right now and could unwittingly infect others. This is particularly the case when visiting relatives, especially the elderly and those with pre-existing medical conditions that render them vulnerable to infection. It is also true for attending religious services or cultural activities,” he said.

He said the ‘second wave’ of infections that several other countries have experienced is also a strong possibility in South Africa, meaning that the move to level 2 of the lockdown is not a ‘free for all.’

“Although many restrictions have been lifted, it does not mean they will not return should we experience a significant rise in infections,

“The rules on social distancing, mask-wearing, social gatherings and international travel remain. Our success rests on our ability to abide by these regulations and to ensure that we each behave carefully and responsibly,” the President said.

Ramaphosa said that the move to alert level 2 will come as a relief to all South Africans who have had to live under stringent restrictions for the last five months.

“It is a sign of the progress we are making in reducing new infections and demand on our health facilities. It is also a very important development as we strive to restart our economy. But it is too soon to celebrate,” Ramaphosa said.

He went on to remind South Africans that the country is still in the middle of a deadly pandemic that has thus far taken more than 11,000 lives in the country.

“At more than half a million confirmed cases, we still have the fifth-highest number of infections in the world. And there is always a chance of a resurgence of the disease,” the President said.

There are signs of hope as the number of new confirmed cases in South Africa continues to decline.

“At the peak of the disease, just one month ago, we were recording around 12 000 new cases a day. This has dropped to an average of around 5 000 a day over the past week. Our recovery rate stands at 80%,” the President said.