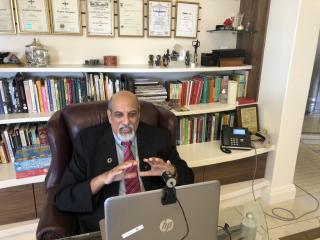 Abdool Karim's resignation took effect on 23 March 2021, exactly one year since he first chaired the committee.

"When I agreed to take on this responsibility a year ago, I did it on the basis that I will serve our country for a year. It's not a contract, it's a voluntary thing. There's no payment involved, we do it as a labour of love." he said.

The Professor said he stepped down to give more time to his research work on HIV.

"I have enormous responsibilities that I have put on hold for a whole year. I can't continue to neglect them, my work on HIV is at a critical stage, I have huge commitments at 5 universities, I have to go back to meeting them. That doesn't mean to say I'm no longer going to care about the Covid situation or our country, I'm always available.

"But I've got to concentrate now and somebody who's leading the scientific response needs to give it full attention." said Karim.

The Department of Health has thanked Karim for his service and wished him well on his journey .

“The Minister is sure all South Africans will join us as we convey our deep appreciation to Prof Abdool Karim for his exceptional stewardship during one of the greatest crises faced by humanity.

“Throughout, he has remained focused, level headed, calm and compassionate, even under enormous pressure.”

Professor Marian Jacobs will temporarily take on Professor Abdool Karim's duties for a few more months until Professor Koleka Mlisana steps up as his successor.