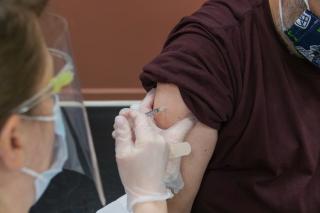 During a media briefing, the Minister revealed that people who have contracted the 501Y.V2 variant are immune from being reinfected.

This was uncovered by local scientists from the KwaZulu-Natal Research Informatics and Sequencing Programme (KRISP).

Professor Penny Moore of the National Institute for Communicable Diseases explained how the process works.

“So, what this means is that the neutralising antibodies elicited by the new variant are somehow different and have the ability to not only recognise their own virus but other viruses.

“It’s not that the antibodies triggered by 501Y.V2 are magical, there’s a drop-off, they do preferentially recognise the virus that infected those people but unlike those triggered by the old variant they seem to have somehow a little more breadth,” said Moore.

Minister Mkhize applauded KRISP for making yet another breakthrough discovery.

The team was the first to discover the 501Y.V2 variant that was driving the second wave in 2020.

“They were also able to demonstrate to us that the people who caught the virus from the first variant was not effective in neutralising the second variant. It did shock us to be honest when we found that out and realised that the cases for reinfection were now open and we have seen so many people have succumbed from reinfection,” said Mkhize.

Government has managed to secure 11 million Johnson&Johnson vaccines to start the roll out of the vaccine programme.

More vaccines from Pfizer and COVAX have also been secured to help with the rest of the rollout that will be completed in 3 phases.

"We have also secured 20 million doses from Pfizer, which will be delivered from the second quarter. Additionally, we have secured 12 million vaccine doses from the COVAX facility and are in the process of finalising our dose allocation from the African Union.

"We are in constant contact with various other vaccine manufacturers to ensure that we have the necessary quantities of vaccines when we need them." said President Cyril Ramaphosa.