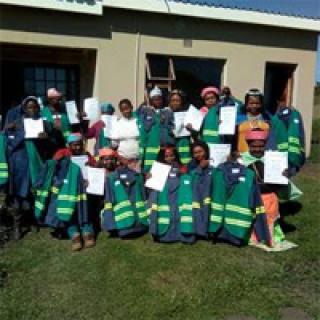 Lead trainer Buyiswa Mdontso (Sis B) said that the group was quick to learn.

“For some, it was their first interaction with a sewing machine. The training covered tracksuit and overalls sewing techniques. Such training will present the trainees an opportunity to generate additional income through sewing tracksuits for local schools,” she said.

SANRAL Southern Region Community Development Specialist, Dr. Mongezi Noah said the trainees were selected by the Project Liaison Committee because of their reputation for quality work.

“The community was consulted and agreed that these are the type of people they could send for training. These individuals are not working and the only thing that helps them put food on the table is sewing. But living in rural areas where people seldom use their services makes them suffer even more,” he said.

“The intention is for them to continue with the skill, thus expanding it to tourism by supplying traditional garments and many other things that would provide stock for an envisaged tourist centre at the bridge. Not forgetting to mention that they will create more job opportunities for the AmaMpondo community,” added Dr. Noah.

Nompumelelo Nokoni, one of the female trainees said she developed an interest in the programme as it would contribute towards her independence as a woman to provide for herself and her family. “Through this programme I gained a lot of knowledge and experience because I did not even know how to operate a sewing machine before and now I can operate it with ease,” she said.

Reflecting on how she plans to utilise her new skill beyond the Mtentu Bridge construction project, Nombuyiselo Phiwayo said:

“The aim is to do good in this project and impress SANRAL to hire us as permanent employees so that I can take care of myself and family.”

Sibongiseni Ntsema, a local well known for his work, was selected to ensure that people living with disabilities also benefit from the project. Ntsema is wheelchair bound.

“In the past I could only sew traditional clothing so I now have an added skill. They have also promised to get me an arm roller sewing machine to make things easier for me when we get started with the work,” he said.

The Mtentu Bridge project forms part of the greenfields portion of the South African National Roads Agency SOC (Ltd) (SANRAL’s) N2 Wild Coast Road project which extends over a distance of 560km from the Gonubie Interchange in East London, to the Isipingo Interchange south of Durban, set to save road users up to 3 hours travelling time upon completion.

To date, approximately R4 million has been spent on local sub-contractors, SMMEs and local suppliers in the Mtentu Bridge construction project, a considerable contribution to the local economy and job creation.

At the end of the 40-month construction period, the 1,1 km long Mtentu Bridge will break records as the highest bridge in Africa and the Southern Hemisphere at 223m high.