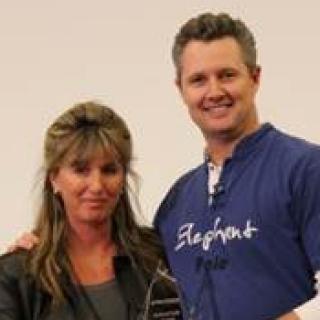 Cape Town?s very own business coach, Kathi Clarke owner of Building Best
Business and an internationally-accredited ActionCOACH has made South Africa
proud by being the only African representative to win an award at the
prestigious
annual Europe, Middle East and Africa (EMEA) Business Excellence Awards which
recently took place in Portugal.

Clarke won one of nine Coaching awards in the Coaching Excellence
category for
her contribution to growing clients? businesses through group coaching. The
awards
were judged according to business results and constitute one of the highest
accolades in the ActionCOACH business coaching arena.

Clarke comments, "It was a huge surprise as a South African delegate in an
international arena to be singled out for excellence.

I?d gone there feeling blessed to be learning from great coaches to find
myself
unbelievably numbered among them.

It was wonderful validation that coming from Africa we can hold our heads
up
high.

It is also testimony to the on-going commitment of my entrepreneurial
clients
who have worked incredibly hard with me to achieve their business success and
continue to do both themselves and our economy proud.'

Brad Sugars, the Founder of ActionCOACH, mentioned in a speech at the
event
that the awards were in recognition of Business Coaches and Entrepreneurs
who are
taking what they do from good to great. The other winners included:

With over 25 years? experience in growing businesses, she and her company
Building Best Business since coming to South Africa in 2011, have successfully
helped
more than 50 entrepreneurs to significantly grow their profits; develop
entrepreneurial muscle and enjoy the lifestyle which prompted them to start
their
own business in the first place. Kathi also finds the time to offer her services
probono
to NPOs.