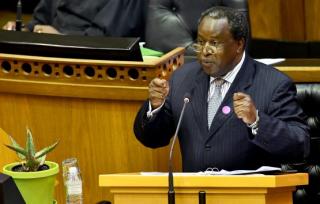 Finance Minister, Tito Mboweni announced that the gross tax revenue will be lower this year compared to what was projected in the 2020 budget.

The Minister delivered the 2021 budget speech on Wednesday, where he confirmed that the gross tax revenue for 2020/21 is now expected to be lower by R213.2 billion.

“However, due to a recovery in consumption and wages in recent months, and mining sector tax receipts, 2020/21 revenue collections are expected to be R99.6 billion higher than estimated in the 2020 MTBPS.

“As a result, government will not introduce measures to increase tax revenue in this Budget, and previously announced increases amounting to R40 billion over the next four years will be withdrawn.”

Some tax proposals include increasing personal income tax brackets and rebates as well as increasing alcohol and tobacco excise duties.

Minister Moboweni acknowledged that government has failed to promote economic growth over the past decade.

Despite attempts to help the economy recover, it has not been able to recover to pre-2008 levels.

Covid-19 has further weakened the economy, putting the country in more debt.

“The fiscal position, which was already weak before the current crisis, has deteriorated sharply, requiring urgent steps to avoid a debt spiral.

The Minister said if this is not reversed, the economy will not be able to generate enough revenue to cover debt.

“Were that to occur, government would lose the ability to control debt and debt-service costs, as investors conclude that lending rates do not adequately compensate them for risk, leading to greater currency volatility and a protracted capital flow reversal.”

“Over the next three years, annual debt-service payments exceed government spending on most functions, including health, economic services, and peace and security.”

These costs now make up 19.2% of tax revenue, as they are used to pay local and overseas bondholders, instead of being used for economic and social reform in South Africa.