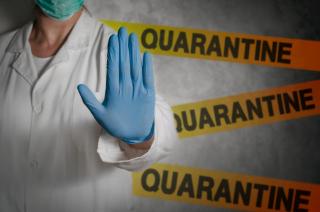 Public Works and Infrastructure Minister Patricia De Lille says the government has identified 37 sites that can be used as quarantine facilities across several provinces as part of government’s response to the Coronavirus (COVID-19) pandemic.

The Minister said this when she briefed the media as part of the department’s response to the outbreak of the virus following a declaration of the national state of disaster by President Cyril Ramaphosa on Sunday.

“One of the key tasks for the Department of Public Works and Infrastructure has been to identify state-owned buildings which could possibly be used as quarantine sites in all 44 districts and eight metros.

“So far we have identified 37 properties in various provinces,” she said.

De Lille said as more cases of the COVID-19 virus are announced by the Department of Health, Health Minister, Dr Zweli Mkhize, has been informed of the 37 sites that have been identified by the national department.

She said some of the sites will be available to people living in informal settlements where there are no such facilities available.

She said teams from the department’s head office and in all regional offices have been visiting all districts to assess properties and this process was ongoing.

“Some of the sites have already been communicated to the Minister of Health.

“We have also communicated to Minister Mkhize that the department is engaging with all provincial public works departments and local governments to ensure that we are able to identify possible quarantine sites in all 44 districts and eight metros in cases where there are no available [public works] owned properties,” she said.

The Minister said the KwaZulu-Natal Department of Public Works has advised that a number of properties are available for use as quarantine sites in Durban North, Pietermaritzburg, Richards Bay and Port Shepstone.

“The Limpopo Provincial Public Works Department has informed us that they can avail four properties to possibly be used as quarantine sites. These are located in Waterberg, Vhembe, Capricorn and Mopani districts.

“The North West Provincial Department of Public Works has advised that they can avail more than 130 sites across the province including four hospitals.” - SAnews.gov.za