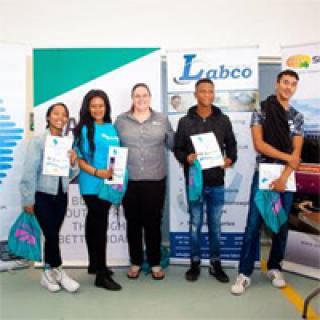 SANRAL together with SMEC, Labco and iGEMS collaborated in hosting the fifth annual iGEMS water engineering competition which educated the different high school learners on the skills required to plan and build a water distribution network. The competition was held at the SANRAL’s Regional Training Laboratory on Monday, 25 March.

The learners from Port Elizabeth high schools were taught the importance of teamwork and how to brainstorm creative solutions using the theoretical and practical parts of civil engineering in order to build infrastructure to provide clean water.

“This competition is very practical, and it gives learners the opportunity to work in teams, with their hands and look at practical issues in the civil engineering sector,” said Tronel Strydom, Professional Technologist for SMEC who judged the water competition. She further added that civil engineers understand that all communities deserve good reliable infrastructure.

The teams consisting of grade eleven and twelve learners were required to build a water distributor to distribute three litre bottles equally between three points on a grid, making use of different connections and two different diameters. The learners were then judged according to a penalty point system.

First prize winner, Basetsana Malie, 18-year-old a grade 12 learner from Ethembeni High School said her team started off not knowing what to do. “We told ourselves to enjoy the competition. We also considered each other’s opinions which helped us win the competition.”

Second prize winner, Xhanti Qandana, 16-year-old, grade 11 learner at Douglas Mbopa said, “At first I thought civil engineering was about building roads but now it has taught me that it also has to do with water affecting roads and how civil engineers would have to deal with such situations.”

Samkelo Ngobese, 17-year-old, grade 12 learner of Daniel Pienaar said, “Civil engineering is the most important skill to have because it will give me the opportunity to build homes and distribute equal amount of water to communities.”

“By supporting this competition, we commit to the development of young aspiring civil engineers. We also further promote the importance of civil engineering through supporting projects like the Nelson Mandela University (NMU) School of Engineering STEM Pipeline Project, bursary and scholarships and training civil engineering graduates in the SANRAL Southern Region’s Technical Excellence Academy,” said Peterson.