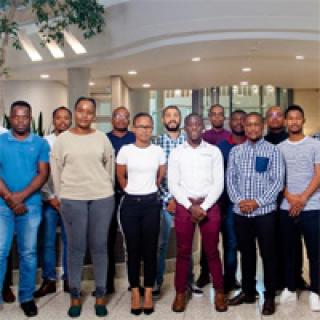 SANRAL has welcomed 18 new engineering candidates to its training academy in the Eastern Cape pushing the number of engineers interned at its Technical Excellence Academy (TEA) in Nelson Mandela Bay to 31and another 15 expected. A further intake due in July, will bring the total close to 50.

The candidates from various provinces in South Africa will be split into project design teams. Most will join the design academy housed at the TEA premises for 21 months, while eight will spend three-months at the materials testing laboratory. The candidates will also gain on-site work experience after their design and laboratory training.

Kobus van der Walt, Head of Technical Excellence Academy, said it was “wonderful that Eastern Cape and KwaZulu Natal Department of Transport have seconded their staff to be part of the academy. The Namibia Roads Authority seconded people to join the academy and they will start at the TEA in July. We are busy finalizing the memorandum of understanding (MOU) between SANRAL and Namibia,” said Van der Walt.

Lumanye Filtane from Idutywa in the Eastern Cape graduated from the University of Pretoria. He is the only one in his family who studied to be a civil engineer.

“I studied civil engineering because I want to contribute to the infrastructure development of the Eastern Cape. My goal is to be a registered engineer with ECSA and I would like to further my studies,” said Filtane.

Nonkanyezi Nxumalo from Nkandla in KwaZulu Natal first wanted to be a teacher but her former high school principal told her about civil engineering.

“My school principal motivated me and told me that he sees a civil engineer in me, so he gave me the SANRAL bursary application. He explained to me what a civil engineer is and that was when I decided that this was the career for me. Another motivation is that there is a bridge in Nkandla, where I live, and it is a single lane bridge allowing only one car to cross at a time. I want to redesign that bridge and expand it. I am the first one in my family to be a civil engineer.”

She believes with hard work and good grades one can achieve anything and go anywhere.

The overall benefits of the TEA are two-fold.

On the one hand, engineering graduates enrolled in the Academy are provided with the much-needed training which means that TEA graduates are likely to achieve the training outcomes required by the Engineering Council of South Africa (ECSA) sooner than candidates who are not as privileged to be in such an enabling environment.

On the other hand, SANRAL benefits from the programme by having access to an increasing pool of highly talented candidate engineers and technologists while establishing themselves in the industry early in their careers.

“During the training we have the solemn obligation to provide the environment required to achieve 11 ECSA outcomes,” said Andrew Van Gruting, senior mentor at the TEA.

What is the ECSA outcomes?

What does the training entail?

During the induction the candidate engineers were introduced to other departments within SANRAL to familiarise themselves.

“No job is in isolation. The candidates will learn that all departments at SANRAL are connected. While they are here they will expand their outlook and what their career is about. It is not about formulas and number crunching there are other aspects to what we do,” said Andrew Van Gruting, senior mentor at the TEA.

“During the next five years we will work with the Engineering Council of South Africa (ECSA) to draft documents that will lead to accreditation of training programmes not just for SANRAL but for other companies too. One would still have to apply to ECSA to be a registered engineer.

“Our goal is to build a second building in the next five years to accommodate the TEA candidates. There is also a need for professional mentors to join the academy,” van Gruting concluded.