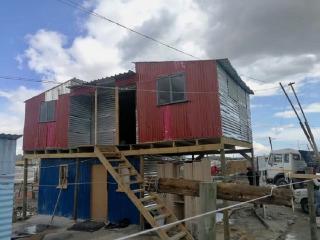 The commitment was made during a meeting on Tuesday to consolidate a plan aimed at addressing the housing challenges in the city.

During the meeting, Plato presented to the Minister the city’s human settlements plans, aimed at responding to COVID-19 and its broader response to housing challenges in the city.

Sisulu welcomed the plan and also committed her full support to the city.

The Minister presented an overall plan, which seeks to cover the various land needs for shelters in the Western Cape.

Despite the plans, the Minister and Mayor acknowledged that the plans are inadequate to respond to the insurmountable need for well-located land and human settlements for those who are in desperate need of shelter.

Both leaders committed to a more comprehensive plan that accommodates both the immediate and long-term needs in a more proactive fashion.

Sisulu said this requires a concerted effort to bring up a holistic approach and to minimise incidents of illegal invasions and evictions.

“We must emphasise that whatever plans we are putting in place are for those who are genuinely distressed and not opportunists. We will screen all those invading land to see if they are in distress and assist them accordingly. However, those who have broken the law have to face the consequences,” Sisulu said.

She also appealed with landlords not to carry out evictions.

“We all understand that the impact of the COVID-19 pandemic has resulted in people losing their jobs, and has hit already destitute communities particularly hard... We need to practice Ubuntu and make arrangements with those whose income security has been affected,” the Minister said.

The meeting came just a few days after the Minister met with community leaders in Khayelitsha and surrounding areas to understand the causes of the recent unrest in the City of Cape Town.

The Minister has also been consulting with various Ministries and other stakeholders in order to address human settlements challenges in the city, which recently resulted in land invasions and evictions.