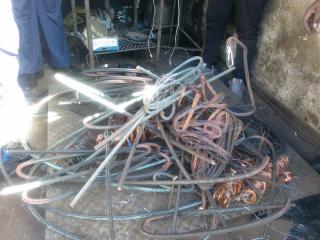 Six suspects have been arrested for the alleged theft of the Passenger Rail Agency of South Africa (PRASA) assets, worth R5.5 million.

The men were arrested during a joint operation by the South African Police Service (SAPS) and the agency’s protection officers on Thursday morning.

“The operation started earlier today with PRASA security personnel following up on their investigation into the theft of the agency’s assets, mainly copper cables and signalling equipment,” PRASA said of the Johannesburg arrests.

“This is fuelling suspicion that elements involved in illegal mining, known as the zama-zamas, are now targeting rail infrastructure. Today’s operation between SAPS and PRASA is part of ongoing efforts by the rail agency working with the police and other stakeholders to curtail the economic sabotage against its network, which has been ramped up during the lockdown period,” PRASA said.

The suspects are being held at the Florida police station.

PRASA also called on the National Prosecuting Authority to prosecute the suspects under economic sabotage charges.

“The sabotage against PRASA’s infrastructure is an attack on the country and its economy and it mostly affects low-income earners and the poor, who rely on passenger rail for affordable transport to and from work.

“PRASA further calls on members of the public to join the effort to preserve the country’s rail infrastructure by reporting incidents of sabotage against its infrastructure to the police,” the agency said.