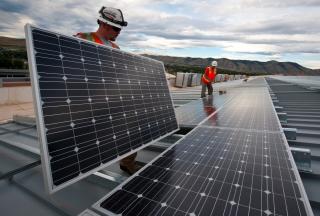 South Africa has been using coal to produce electricity for years, but it has proven to be unsustainable along with the many setbacks faced by Eskom. Now, more sustainable forms of energy are being considered.

Schnabel said although the cost for solar power is relatively high, solar systems tend to have a long guarantee period of up to 30 years and they continue to work well even after that period.

It is for this reason he has encouraged people to not look at solar systems as an expensive short term purchase, but rather as a long term investment.

With the many changes happening in the world, some have predicted that after Covid-19 the world will face climate change.

It has been predicted that global warming will hit the world harder than the Covid-19 pandemic.

He said a renewable source of energy, like solar power is already currently cheaper than using coal to generate electricity.

"The fact is that even today if you run a coal fire plant, only the fuel costs and the operation of a coal fire plant is at the same cost as a solar PV plant in terms of the entire cost of funding and building."

The move to solar power will most likely happen over time. President Cyril Ramaphosa has even said that South Africa will start moving to more sustainable and reliable forms of energy over the next 2 years.

The 2 year timeframe has been criticised and labelled as ambitious by some skeptics, as the government plans to restructure Eskom while moving to solar energy.

“The work of restructuring Eskom into separate entities for generation, transmission and distribution continues and will enhance competition and ensure the sustainability of independent power producers going forward." said Ramaphosa.

Johannesburg and Cape Town have already started planning to move to solar energy as they cut ties with Eskom.