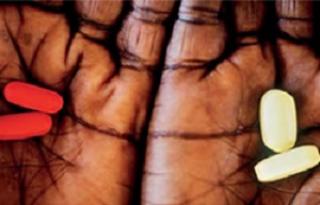 Covid-19 is a form of Coronavirus but it is known as a novel virus - meaning it is completely new and never existed before. Because of this scientists who specialise in studying Coronaviruses weren't certain how it would behave.

As the Covid-19 virus was spreading around the world, and was first reaching South Africa, it was already know that older people suffered far worse outcomes than the young.  There was also preliminary data that men tended to be affected more seriously than women.

What was not known was how it would affect people who were already positive for HIV/AIDS or infected with TB. This was particularly important for South Africa as the country has 7.9 million people living with HIV/AIDS and is one of the worst affected countries for TB. It has the fourth highest rate of TIV-TB co-infections at 59%.

Information from early outbreaks such as those in China was of little use.  When asked in a television interview in April, Professor Salim Abdool Karim explained that South  African scientists had asked their Chinese colleagues about HIV positive patients with Covid-19. Although China had more than 80 000 cases of Covid-19 only one patient in was HIV positive and their outcome was not medically unusual. So that was not much benefit to local scientists.

There was much concern because with viruses like the seasonal flu, those who are HIV positive can suffer much worse outcomes than those who are not.

Now Professor Salim Abdool Karim, and his research partner Professor Quarraisha Abdool Karim have published their research paper in the journal Science which shows that HIV and TB do not lead to much increased likelihood of death from Covid-19.

The researchers, who are also married, studied 12 987 Covid-19 patients and proved that their HIV and TV status had only a modest effect on Covid-19 mortality.

While this is good news for those who are living with HIV and TB, it is still imperative that they take their medication.  There is a serious concern that during lockdown many patients were not able to collect their medication from clinics and hospitals.

While more research has to be conducted, the two professors believe that the outcome for those who are living with HIV and TB will be much worse if their immune systems are compromised as a result of not taking their medications.

The message to all South Africans is to maintain vigilance as the infection rate stabilises, keep practicing distancing and hygiene measures - and most importantly keep taking your prescribed medications.