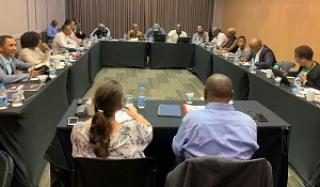 After meeting with the Minister responsible for higher education over the weekend, the national grouping of student SRCs has agreed to drop their campaign to shutdown university campuses this week.

In a statement Minister Blade Nzimande said he, 'welcomes the calling off of the national shutdown with immediate effect in the wake of the common understanding and agreements reached with the student leadership'.

The SAUS is now calling for registration to continue at campuses across the country.

Minister Nzimande has said that more than 400 000 university students have been approved for university funding this year. He was speaking to journalist Karima Brown on Sunday morning. This figure will be updated as registration is still under way. Figures from TVET Colleges are not yet available.  95% of the 700 000 students at TVET Colleges are funded by NSFAS. He said that it might be close to 50% of all higher education students received funding from NSFAS.  R35 billion will be distrubuted by NSFAS this year, said Nzimande.

The Minister highlighted that this year for the first time NSFAS funding was approved before students went to universities to register so they didn't have to pay registration fees.

Nzimande says he has committed to investigate the situtation with Unisa where more and more students are young people who are studying full time.  This is a change from the past where most Unisa students were employed and studying part time.

Nzimande explained that he is also focused on TVET Colleges and they must be expaned. "TVET Colleges is a mix between theory and practice in the workplace. I have appointed an industrial envoy to be a link between my office and industry. I want to have a direct ongoing relationship with the business organisation in this country.  We are also going to announce an important cooperation with the Germans in the wake of Chancellor Merkel's visit this week".