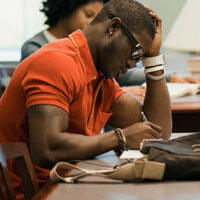 The Committee met with the NWU Council and management in Potchefstroom and
with the Vuselela TVET College leadership in Klerksdorp as part of its oversight work.

Following the meeting at NWU, the Committee said the institution must prioritise
transformation and also that it needed to operate under one management. The
Committee further stated that the university must protect human rights and tighten
measures to curb incidents of racism.

Committee Chairperson Ms Yvonne Phosa said all stakeholders must work
together to ensure that education - which is one of President Jacob Zumas apex
priorities - improves during the second phase of transition. "We are now in the fifth
Parliament.

The Committee was concerned that the NWU has 74 000 students enrolled at its
Potchefstroom, Mafikeng and Vaal campuses, but they are not centrally managed.

"We must be honest enough to admit that the federal model of management has
not been in the best interests of the country. If we do not support a move from a
federal system to one university, it will be a recipe for disaster. We are saying no to
the federal model and strongly support a unified university,' Ms Phosa said.

The Committee agreed that some progress had been made since the merger of
Potchefstroom and North West universities in 2004. "From our point of view, it is
clear that the university has come a long way, but I am sure you will agree that
there is still a long way to go,' Ms Phosa said.

She said the university needed to change its culture and leadership to become
an institution that embraces diversity and upholds the human rights of all students,
irrespective of their colour or religion. She further made it clear that all initiation
practices at the university must end immediately. A student, Thabang Makhoang,
died in 2012 as a result of these practices.

"It is clear that initiation practices are still happening and the Portfolio
Committee cannot accept that even though policies are in place, incidents still
occur. This makes us question the value of the policies,' Ms Phosa said.

The Chairperson of the NWU Council, Prof Fika van Rensburg, briefed the
Committee about a report to the Minister of Higher Education and Training, Mr Blade
Nzimande, following an investigation into alleged Nazism on campus. Prof Van
Rensburg said an independent task team investigated the matter, however, he said
the report was confidential as the claims made in it had not been cross-examined. He
assured the Committee that the university has "resolved that it will not tolerate any
infringement of human rights'.

During the meeting with Vuselela TVET College in Klerksdorp, the lack of security
on campus and the allocation of National Student Financial Aid Scheme (NSFAS)
funds to students were the main concerns.

The Committee heard about groups of up to 100 armed robbers raiding the
campus up to six times a month and stealing equipment with an estimated value of
R500 000 on average. The burglars also helped themselves to students personal
belongings and two female students had been raped.

The Committee considered measures to curb crime, including improving the provision
of security by using the police or army and moving the campus to a safer location.
Ms Phosa said: "There has to be a plan on security at the campus because
government assets have to be protected. If we say the campus has to move, but no
building has been identified, it will be like solving a problem with a problem. The
college has to come up with the best solution for the institution and the students,
and it must ensure the protection of students, the building, the equipment and
security guards.'

Ms Phosa added that the Department of Higher Education and Training, which
was represented at the meeting, must attend to the problem of crime on campus and
then provide the Committee with a report outlining how it had dealt with the matter.

On the issue of the allocation of NSFAS funds, NSFAS officials explained that
there is a problem with the claims process at the college. However, college
management argued that the challenge lay with the new regulations governing
allowances.

For example, the regulations stipulate that students residing within a 10km radius
of campus are not eligible for transport allowances, but those who live within a 40km
radius did not qualify for accommodation funds.

The Committee was unhappy that key senior positions at the institution - the
Deputy Principal and Chief Financial Officer - were vacant.

The Colleges Principal, Ms Ann Naik, said the visit demonstrated the Committees
interest in how TVET colleges are being managed. "It also shows that you are going
to assist me in how this college is managed. I have inherited lots of challenges, but I
am confident that with the assistance of all stakeholders we can turn this college
around,' she said.

Vuselela is one of the three TVET colleges in the North West Province and has 8
151 students enrolled at five campuses in Jouberton, Klerksdorp, Matlosana,
Potchefstroom and Taung. It was established in 2002 as a result of a merger of four
technical colleges.