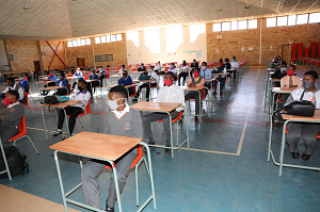 Umalusi has given the Department of Basic Education the go ahead to release the 2020 matric results.

Umalusi Chairman, John Volmik said Umalusi is satisfied with the results despite facing some challenges in 2020.

“The executive committee of council approves the release of the DBE results of the November 2020 NSC based on available evidence that the examinations were administered in accordance with the examination policies and regulations (despite) the generally identified irregularities.

“But the DBE is required to block the results of candidates implicated in irregularities including the candidates involved in group copying pending the outcome of further DBE investigations.”

This decision from Umalusi comes despite the leak of two matric exam papers. During the matric exams last year, the mathematics and physical sciences paper 2 exams were leaked.

The department announced a rewrite on December 4, as Umalusi declared the integrity of the exams to have been compromised.

However, an application was sent to the High Court to challenge the decision. The High Court then decided to not allow the rewrite.

This decision was accepted by the Department of Basic Education, who later released a statement.

“CEM agreed that the Class of 2020 has been confronted by many challenges brought about by the pandemic; and it would therefore be unfair to further subject the Class of 2020, their teachers and parents to further uncertainties and exacerbate the anxieties they currently face,

“The Class of 2020, their teachers and their parents should take solace in CEM’s decision that the Mathematics Paper 2 and Physical Science Paper 2 will not be rewritten on 15 and 17 December 2020." said the department.

Basic Education Minister Angie Motshekga will announce the provincial results on 22 February, while learners will receive their results on 23 February.