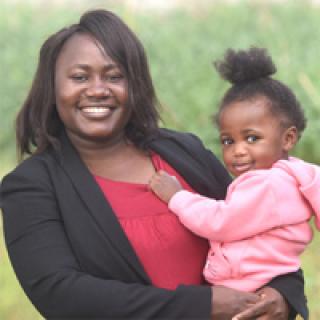 She lost her mother two months before enrolling for a Master of Commerce (MCom) degree, found out she was pregnant during her first block of classes and went into labour an evening before crucial tests during her second block.

But Mildreat Muroyiwa was not deterred. She persisted and will now graduate with her MCom degree in Development Finance on Friday, 12 July.

Muroyiwa, the last of four siblings raised by a single mother in Mpopoma, a high-density township in the city of Bulawayo, Zimbabwe, sees the attainment of her master’s degree as a pivotal moment in the journey of her life which has been marked by a sheer determination to overcome all odds.

Just before her first block of classes at the University of Cape Town’s Graduate School of Business (UCT GSB) in February 2017, Muroyiwa found out that she was pregnant. Determined to continue, her unborn child became part of the masters’ experience. And during her second block of classes in August 2017, the evening before she was meant to write a test, Muroyiwa went into labour and ended up taking her books along for the experience, hoping to still write the next morning.

It was an intense period of learning for Muroyiwa. “I honestly hoped the baby would be born after the block, but as life would have it I went into labour one Saturday evening before two important class tests that would contribute to my overall course mark. I so hoped the pain was fake so much that I carried my notebooks to the delivery ward. My classmates even nicknamed my baby Baby MCom,” she shared.

During her third and final block of classes Muroyiwa had to travel with her niece from Johannesburg to help look after the child while she was in class and would sometimes go back to her rental apartment to feed the baby and express milk during lunch breaks. She would only return home at 20:00 or 21:00 after school.

Muroyiwa says of her life: “I have always refused to let people dictate what I can and cannot do. While some thought and intimated it was difficult or even impossible to study while pregnant I was determined to pursue my dream.”

Raised by her mother - a woman though of limited education and means, desired to see the best in her children and strove to make it a reality - and extended family, after her father walked out when she was still an infant, Muroyiwa is the only one of her family to attain a university education.