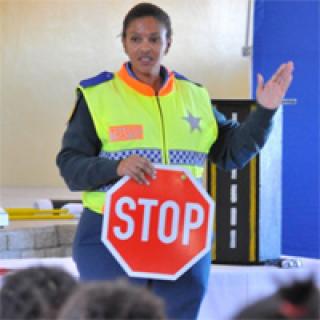 About 20 unemployed youth have been contracted by the North West Department of Human Settlements, Public Safety and Liaison to be part of a learnership programme on Road Traffic Law Enforcement (NQL 4) to help address the shortage of traffic officers.

The recruitment follows the department?s commitment to intensify traffic law enforcement operations and increase visibility of law enforcement officers in an effort to reduce road accidents and fatalities on all major roads in the province.

The contracted individuals including men and women below the age of 35, will go through theoretical and practical training in different traffic management levels for the duration of 12 months while at the Traffic Management College in Limpopo.

Departmental MEC Nono Maloyi said the province was currently facing a challenge of a shortage of traffic officers and it intended to recruit and encourage more young unemployed men and women to address the challenge.

"The learnership programme is one of the programmes we are using as government to address the shortage of traffic officers and we intend to recruit more young people as this will also reduce the high number of unemployment in the country, which is one of the country?s priorities this year,' said Maloyi.

Maloyi emphasised that the contracted men and women must ensure that they complete the course as the province was investing in the skills which they will acquire during the programme.

"The province is already investing in your skills and we are expecting you to come and make the provincial roads safer to travel on.'

Speaking on behalf of the contracted learners, Lorato Jood promised that they will join forces and work as a team to put the province on the map.

"We will do our best to ensure that we enforce road traffic law to reduce road carnage in the province upon our return,' said an optimistic Jood.

The annual road safety competition seeks to establish ways of reducing the high rate of road fatalities in the country.

The debates started at district level, where 80 high schools across the province took part with only four schools making it through the provincial levels.

Maloyi said the participation of learners in the road safety debate was critical as they had a role to play in advocating and networking with their peers on the Global Plan of Road Safety which focuses on road safety management.

The North West is the defending champion, after scooping first place during the National Road Safety Campaigns debate held in Durban. - BuaNews