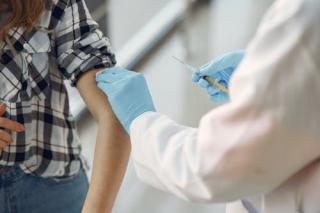 Some South Africans have been concerned about the side effects of the vaccine. Conspiracy theories and fake news have not been helping the matter, as the rollout of the vaccine will only be successful if people are willing to be vaccinated.

Epidemiologist and chair of the ministerial advisory committee (MAC), Professor Salim Abdool Karim said people do not need to worry about the side effects of the Covid-19 vaccine.

Karim said side effects happen naturally, as with all forms of medication.

“We have found certainly with six vaccines that have released their results that the safety profile of the vaccines is really good. So there’s no reason to be concerned if somebody does encounter side effects, there’s a reporting mechanism we have in place.” said Karim.

A recent survey done by the University of Johannesburg (UJ) and Human Sciences Research Council (HSRC) found that the majority of South Africans are willing to take the vaccine.

Professor Narnia Bohler-Muller of the Human Sciences Research Council (HSRC) has called for the government to educate people about Covid-19 vaccines.

“The analysis shows that vaccine hesitancy comes down to a range of legitimate concerns about a vaccine developed and rolled out in record time, as well as some distrust in the government and corporations. We need a vaccine literacy campaign that provides factual information that will sway the waverers," Bohler-Muller said.

President Cyril Ramaphosa said a mass vaccination campaign will begin soon , as the government hopes to reach South Africans from all parts of the country.

South Africa is expected to receive 1.5 million AstraZeneca vaccine doses from the Serum Institute of India in the coming weeks.

“It will reach all parts of the country and will be phased to ensure that those most in need are prioritised. The first vaccines to arrive will be provided to healthcare workers, who will be targeted in the first phase.