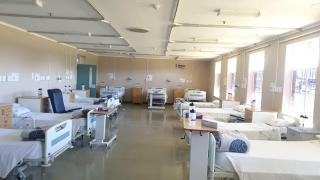 The Western Cape has reached the peak of its second wave and a third wave could be next as cases continue to rise.

Western Cape Head of Health, Keith Cloete said planning for a third wave is a reality the province must face.

“We have entered the peak of the second wave with early signs of stabilisation, not that we have gone through the peak. Hospitalisation mortality continues to show an increase but there’s early signs of possibly moving to a plato.”

“A peak is when your rate of increase starts slowing down. So your seven day average… when you take the cases you had in the last seven days and divide them by seven and compare that to all the new cases in the sevens days before then. The peak is when those two numbers start becoming the same.” said Cloete.

He said there is a gap between the government's goal to develop full herd immunity and the second wave.

This is why the province has been planning for a third wave, as immunisation is not guaranteed to happen soon.

The most recent report shows that the province has recorded a total of 231 060 confirmed cases and 7822 deaths.

The increasing number of Covid-19 hospitalisations in the Western Cape has affected the oxygen supply in hospitals.

The province has been relying on deliveries of oxygen supplies from the Eastern Cape as hospitals since hospitals in the province have been facing a shortage.

“There are daily deliveries from the Eastern Cape from PE. The Western Cape now has five bulk oxygen tanks allocated for the delivery of oxygen supplies during this week. We will monitor the utilisation of oxygen carefully over the coming weeks,” said Cloete.

The country currently has 200 565 active cases, with the Western Cape falling in the top 3 provinces with the most active cases.

The Minister of Health, Dr Zweli Mkhize has confirmed that the first supply of the vaccine will be arriving in January.

"South Africa will be receiving 1 000 000 (one million) doses in January and 500 000 (five hundred thousand) doses in February from the SII (Serum Institute of India)." said Mkhize in a statement.

This supply of the vaccine will be used to immunise 1.25 million healthcare workers in the public and private sector.

The National Department of Health will be handling the negotiations process and any payment issues directly with the manufacturers.

"We urge the public to be patient with us as we continue to engage manufacturers. Our commitment remains to save and protect the lives of our people. We will not neglect our responsibility to protect lives and also fight this pandemic." said Mkhize.