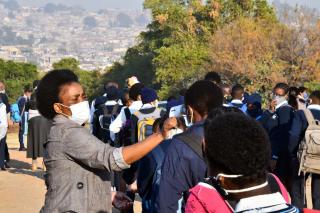 The Western Cape Education Department has revealed that thousands of learners have still not been placed in schools.

It was revealed that the Department had struggled to place more than 6 500 learners by 8 March 2021. Western Cape Education Department spokesperson, Bronagh Hammond said a new updated figure would be available by Monday.

Some areas have become hotspots, as there are more learners than there are available spaces.

"We've seen growth in certain areas and we are battling to accommodate some of those learners in those areas.

"It's not that we're not directing our infrastructure projects there, we are doing so and in many of the areas where we are having issues, we've had new building developments recently. It's just the case that it's expanding at such a rapid rate and we really do not have the budget or the teachers to support the building of 20 schools each year."

Along with these problems, the department is dealing with new registrations of learners from other provinces in the country.

This has made it difficult for the department, as it is struggling to afford new teachers and staff for schools.

Hammond said the department has been transparent over the years about its struggle to keep up with placing all learners in schools.

Most of the learners who are looking for school placements are either in grade 8 or grade 1.

Applications for online admissions close on 26 March 2021, and they can be done online at https://admissions.westerncape.gov.za/admissions/login or on paper for parents who do not have access to the internet.

Watch this video to see how you can register on the website. Once you have registered, you can watch this tutorial on how to apply.

“Parents must apply to at least three schools, including the ones closest to your home, and order their preference on the system,” said Hammond.

The following supporting documents are needed: