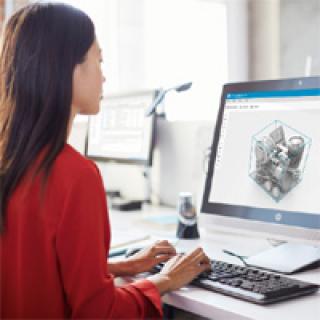 It has become an accepted fact that there is a shortage of women within the STEM (science, technology, engineering and math) professional fields. Apart from simply recognizing this fact, fortunately there are many programs as well as individuals who are actively trying to change this status quo.

One of these professionals, who is leading by example, is Esther Villars, a seasoned tech professional and CTO of Flatpyramid, the online 3D models and design marketplace.

Esther and her team are making a concerted effort to attract more women into the 3D design and computer graphics space, and have also identified Africa as a space where women are to be especially encouraged.

Esther’s began her career as a Mechanical Engineer and transitioned into software development and computer programming over 13 years ago. She has a passion for 3d computer graphics, design and software, which led her to the role as CTO of FlatPyramid.

Part of this lack of women in the space is due to a lack of awareness about the opportunities, as Esther explains further, “I think that most women globally don’t know that they can make a significant living from creating and selling their 3D model designs online on our marketplace. This is very relevant for women that live in emerging regions of the world like in Africa where earning income in U.S dollars goes a long way.

Today on FlatPyramid, most of our 3D artists on the marketplace sell under a pseudonym and so it is not easily evident who is male or female. However, I am always pleasantly surprised especially, when we are paying monthly commissions to our 3D artists selling on our site to discover that a few are women.”

Esther also stresses that it’s easier than people think to get started, as there is a wealth of resources online to assist both aspiring and professional women 3D designers. For those just getting into the space from Africa, there is a fantastic resource available - where online courses and support is available.

Designers also can simply download any of the free 3D modeling software like Blender or simplified 3D engines like the WebVR Editor by FlatPyramid. Then simply go over the online tutorials and create whatever 3D models and designs and experiences that they want, and then simply load onto the marketplace platform.

Esther believes that in order to get more women into the 3D space, it is important to share the information about the huge opportunities that exist in the space. She points out, “to work from home, doing fascinating and interesting 3D design, that others will benefit from, while earning a living, is undeniably appealing. There is also the opportunity for these designers, especially women, to get hired by a company overseas as a 3D artist or 3D modeler, which is one of the fasted growing career/skill sets globally. The barrier to entry is relatively low but the upside financially is huge and the freedom it provides is astonishing especially, for women in Africa and other emerging markets.”