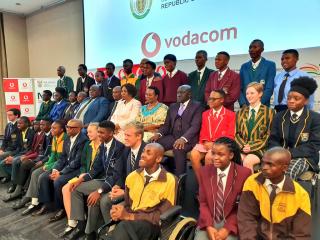 The Minister of Education has released the pass rate for the Matric exams of 2019. She was addressing the country in the presence of the top 20 learners from the class of 2019.

A total of 790 405 candidates sat for 147 question papers in 7 416 examination centres nationwide. A further 212 learners wrote at correctional facilities.

In another groundbreaking development, the Minister revealed none of the country’s 75 districts scored lower than 60%.

A breakdown of the results saw the Free State (88.4%) reclaim the top spot it relinquished to the Gauteng province in the previous year. With 87.2%, Gauteng dropped to second place. The North West (86.8%) and the Western Cape (82.3%) followed, respectively.

With 81.3%, KwaZulu-Natal followed, thanks largely to a marked 5% improvement from the 2018 class.

Motshekga said: “Districts are a crucial interface of the basic education sector in identifying best practice, sharing information and providing support to schools. The continued growth in the performance of districts is closely monitored and evaluated by both provincial and national departments.”

The results, she said, were a further indication that the country’s basic education system has been on a steady rise.

“The MECs are here, when we started this term we agreed that education would be the architecture of this country. We have to make sure that we improve,” she said.

“As you can see, all our provinces have performed above 70%, which is what we have been aiming for,” the Minister said, singling out Limpopo and KwaZulu-Natal for their marked improvements.

“To colleagues in the sector, I’m ready to leave – you can go tell the President,” said the Minister jokingly.

“A majority of our learners – 65% - passed with a bachelors or a diploma. It is very important to note that 337 730 candidates, achieved these and are eligible to study at institution of higher learning,” she said.

A total of 78 984 are can study at technical and vocational education training. – SAnews.gov.za