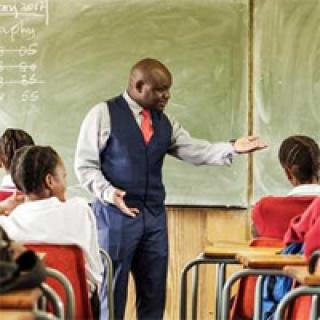 If you step into a classroom in South Africa’s Limpopo province during a lesson, you’re very likely to hear the teacher speaking more than one language. She might begin a sentence in English, and then switch to Sepedi – the African language most commonly spoken as a mother tongue in the province.

This is a practice known as code switching or code mixing, which can form part of a translanguaging process. And it is not actually allowed in most South African classrooms. According to the country’s official language policies, schools must choose a language or languages of learning and teaching. Most choose English or Afrikaans and not the African language spoken in the area. African languages are then only taught as subjects and are rarely used as a medium of instruction.

But, as a recent study we conducted in Limpopo showed, the real daily language policy within classrooms differs significantly from the official language policy document of the school.

Teachers use code switching as well as a translanguaging process, alternating and blending languages to help pupils understand concepts. There is a reason for this: research has proved many times that pupils learn best in their own mother tongues.

This is, of course, not unique to South Africa – it happens in all multilingual societies to a certain degree. Some teachers who answered the questionnaire in Limpopo said they found value in code switching or translanguaging. They also felt that African languages were undervalued in their schools. This is not ideal in a country with 11 official languages that enjoy Constitutional protection.

A much more flexible and open teaching and language policy would help teachers and pupils to enable a meaningful learning environment in a multilingual and diverse classroom setting. Translanguaging should be embraced and supported as a teaching and learning technique.

The research was conducted among 1 094 teachers at about 110 schools across Limpopo. This large scale quantitative study covered public primary and secondary schools and the questionnaire focused on general teaching conditions, language attitudes and teachers’ language practices.

Only 16.5 % of all participating teachers reported never facing any language related challenges in their work. Others had all dealt with some issues related to language – either in terms of their school’s language policy or how they grappled with what languages to use in class. For some, these were strongly emotional issues. One told us:

I feel strongly that learners should not lose their home language in favour of other languages. Home languages are part of their identity.