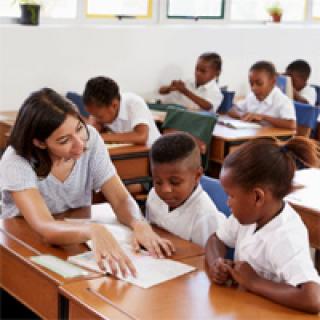 In South Africa, one in five teachers in the foundation phase – roughly from ages 6 to 9 – are male. This is consistent with a global trend that see men being more likely to teach adolescents than young children.

A lack of male teachers for young children has become the focus of a growing body of research internationally. Typically, this research has examined the experiences of male educators and explanations for their absence.

This work has appeared amid a global gender equity movement and adjacent to calls for greater female representation in the fields of science, technology, engineering, mathematics and in senior managerial positions.

In South Africa, research focusing on male teachers has emerged alongside recent calls to increase the involvement of men in the lives of young children. Around 43% of children under the age of 5 live without a biological father. Here, young children’s observations of men as caring are particularly limited.

To date, our research has considered how experiences of childhood are shaped by gender, sexuality, race, class and culture, and affected by poverty, violence, and the spread of HIV. In addition, we’ve investigated how interactions and relationships between teachers and students are shaped by gender and behaviour. Together, this work has contributed to understanding child development and the social forces that construct and reinforce “traditional” views of masculinity and femininity.

In doing so, we came to better understand why men might avoid this work, but also the reasons why schools should include both female and male teachers.

For men to choose to work as teachers of children in the early years of schooling, they must first overcome gender barriers.

For example, gender expectations and stereotypes strongly influence why men shy away from teaching – with teaching often viewed as “women’s work” and associated with the care and nurturing of young children. Consequently, men who teach young children may have their masculinity questioned or scrutinised, and not be seen as “real men”.

Teaching young children, however, requires a balance of stereotypically feminine and masculine traits: the teacher must be caring, yet authoritative, a listener, and a leader. Schools also benefit when teachers reflect the interests, needs and backgrounds of their students. One important way this can be done is by including both male and female teachers.

To understand how men are perceived in the teaching profession, we spoke to male teachers and their female colleagues.

Our research found that there were conflicting accounts of men’s roles. Some teachers welcomed men, and others strongly condemned associations between men and young children.

Those that thought that men were important in children’s lives connected men with stereotypical male roles. They reported an expectation that male teachers should display traditional masculine traits, and be “sportsmen” and “disciplinarians”.

In this way, male teachers were seen as socially acceptable when their behaviour conformed with pre-existing ideas of men: reproducing the dominant notions of masculine power that position men as being more suitable for management positions.

On a more progressive note, some of our findings show support for male teachers who can show children caring and non-violent ways of being a man. The need for such male teachers stems from a wider societal problem in South Africa.