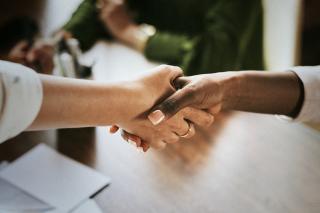 Henry Boyle said: “The most important trip you may take in life is meeting people halfway.”

Negotiation skills are part of our everyday life. However, negotiating a salary increase is a tough subject. Not everyone feels comfortable talking money. Many employees feel that their manager should “notice” their hard work and acknowledge their efforts with an equivalent salary increase. Well, you are under the wrong impression…it is highly unlikely that management will give away profits without a negotiation process. It is up to each employee to negotiate their own raise when the time comes for performance appraisals.

5 tips to assist you in a salary increase negotiation process:

It was Chester L. Karras that said:“In business as in life, you don’t get what you deserve, you get what you negotiate.” If you think you deserve a bigger paycheck, no one is going to negotiate it on your behalf. Here are some tips to assist you:

John F. Kennedy said: “Let us never negotiate out of fear. But let us never fear to negotiate.” People have a natural fear of rejection, refusal, or conflict. It’s important to keep in mind that negotiation methods are there to avoid conflict. Many feel afraid of going to their boss asking for a raise because they might be unapproachable. Nobody wants to get shouted at or rejected. But stop and think about it. What is the worst that can happen?

Yes, you might get screamed at or even rejected, but the alternative might also be true. You might be pleasantly surprised. You won’t know until you are brave enough to voice your value. Those who are willing to take the risk, reap the rewards. And if you do get rejected, at least you know why and that you tried. Then you can either accept it and move on, or work on the areas that need improvement.

Negative feedback or getting screamed at normally breaks your morale and motivation. But the biggest threat is that people talk down to themselves as well. “Don’t bargain yourself down before you get to the table,” said Carol Frohlinger. Don’t undervalue your self-worth.

It is up to you to build self-confidence. You bring something valuable to the table, with your own set of unique skills, and ideas. Someone once said, “it’s not who you are that holds you back, it’s who you think you’re not.” Your worst enemy or critic is the one in the mirror. If you are not your own biggest fan or your own cheerleader, how do you expect others to be?

A lot of the time, employees don’t stand up for themselves or voice their opinions and thoughts. You are not invited to a meeting to sit and listen and drink coffee. People want your opinion, to brainstorm with you and voice your ideas. It is also your responsibility to let people know which ideas were yours. Don’t be quiet and don’t let someone else steal your thunder. We are not saying become angry or arrogant.

We are simply stating that you should ‘own’ your contributions toward the job. Speaking up builds confidence and lays the foundation for good negotiations. If your boss is aware of what you contributed and that you ‘own’ it, they will be more lenient during negotiations.

4.    Equip yourself with knowledge and deal with the facts.

Don’t go into a meeting or negotiation unprepared. Know what you want to achieve. Equip yourself with the knowledge and skills you need to sit around a table and discuss your raise. Know where to start, how to speak, what to say and when to say it. Howard Baker said: “The most difficult thing in any negotiation, almost, is making sure that you strip it of the emotion and deal with the facts.”

Look only at the facts and try not to take the negotiation process too personally. Brian Koslow adds: “During a negotiation, it would be wise not to take anything personally. If you leave personalities out of it, you will be able to see opportunities more objectively.”

5.    Be open to change and have flexibility

Bill Coleman advises: “The worst thing you can say is, ‘I want $X for this job,’ leaving no opening for negotiation by the other side. Rather say, ‘I hope to earn between $X and $X.’ That gives the other party more flexibility.” Be open to negotiation. Be open to change and have a flexible mindset. “You must never try to make all the money that’s in a deal. Let the other fellow make some money too, because if you have a reputation for always making all the money, you won’t have many deals,” J. Paul Getty gives us something to think about.

So, if you’ve been working hard, putting in the effort, and going the extra mile, now is the time to negotiate your salary increase. It is up to you to convince your boss that you are worth the extra spend. And if the answer from your boss is no, then get a timeline when next you can discuss the topic. Make sure you equip yourself with proper negotiation skills by enrolling in our Negotiation Skills Training course and then you go and make it happen…