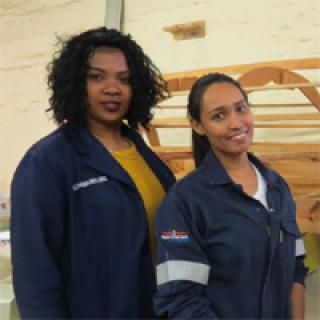 A gender revolution has begun in what were exclusively male industries, led by a still-tiny vanguard of women artisans produced by South Africa’s TVET College system.

It’s pretty much a given that any schoolgirl (or schoolboy) asked to describe a ‘boilermaker’ or ‘shipbuilder’ will not imagine anyone remotely like Lee-Anne Andrews or Candra Pedro, but this is destined to change if they have anything to do with it. And it’s not just because gender prejudice and stereotypes have no place in our democracy.

In Lee-Anne’s case, that programme was the newly launched NC(V) Engineering Fabrication certificate course in which she enrolled at Northlink College in 2008. After passing many of the 21 subjects with distinction, she joined Damen Shipping as an Apprentice Boilermaker in 2011 and passed her trade test in Boilermaking in May 2013, becoming the first female boilermaker in South Africa. Only 27 years old, Lee-Anne is a lecturer at False Bay TVET College.

With a father and brother being artisans, Bonteheuwel-born Candra began making unusual but natural choices in high school already, including taking Woodwork as a subject. After matriculating at Spes Bona High in 2010, she enrolled for the N5 level National Certificate in Multi-Disciplinary Drawing Office Practice. Soon thereafter, she saw an Armscor advert for a shipbuilding apprenticeship, immediately applied and was placed in the Shipbuilding Apprenticeship Programme based at Simonstown Dockyard. After completing her Structural Steel and Plating N2 Certificate at Northlink College and six years of work to meet the work experience requirement, she took the trade test at False Bay TVET College in May 2019.